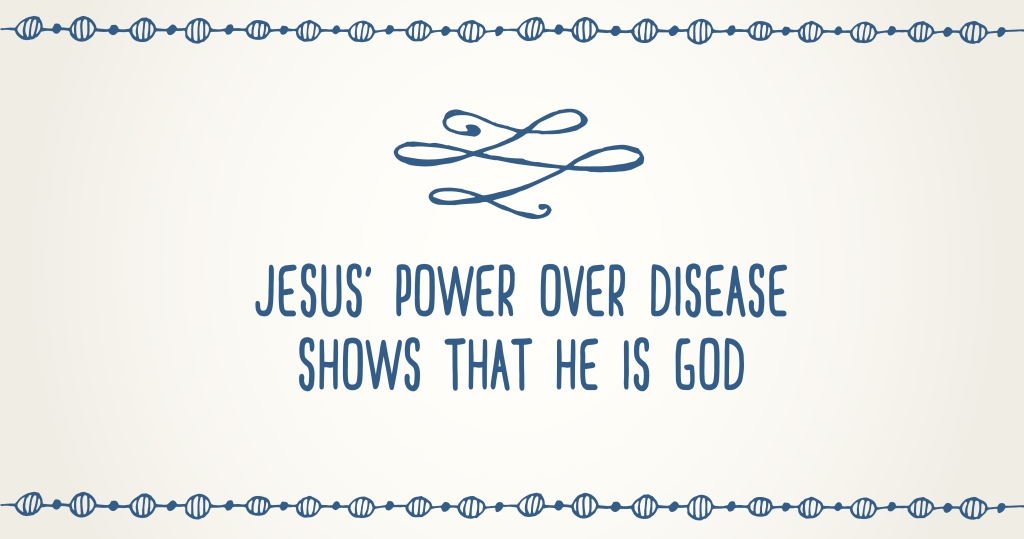 Because Jesus is God, He is able to heal all sickness and disease.

Mark 1:28-34
And immediately his fame spread abroad throughout all the region round about Galilee. And forthwith, when they were come out of the synagogue, they entered into the house of Simon and Andrew, with James and John. But Simon’s wife’s mother lay sick of a fever, and anon they tell him of her. And he came and took her by the hand, and lifted her up; and immediately the fever left her, and she ministered unto them. And at even, when the sun did set, they brought unto him all that were diseased, and them that were possessed with devils.And all the city was gathered together at the door. And he healed many that were sick of divers diseases, and cast out many devils; and suffered not the devils to speak, because they knew him.

Mark 1:39-45
And he preached in their synagogues throughout all Galilee, and cast out devils. And there came a leper to him, beseeching him, and kneeling down to him, and saying unto him, If thou wilt, thou canst make me clean. And Jesus, moved with compassion, put forth his hand, and touched him, and saith unto him, I will; be thou clean. And as soon as he had spoken, immediately the leprosy departed from him, and he was cleansed.

And he straitly charged him, and forthwith sent him away; And saith unto him, See thou say nothing to any man: but go thy way, shew thyself to the priest, and offer for thy cleansing those things which Moses commanded, for a testimony unto them. But he went out, and began to publish it much, and to blaze abroad the matter, insomuch that Jesus could no more openly enter into the city, but was without in desert places: and they came to him from every quarter.